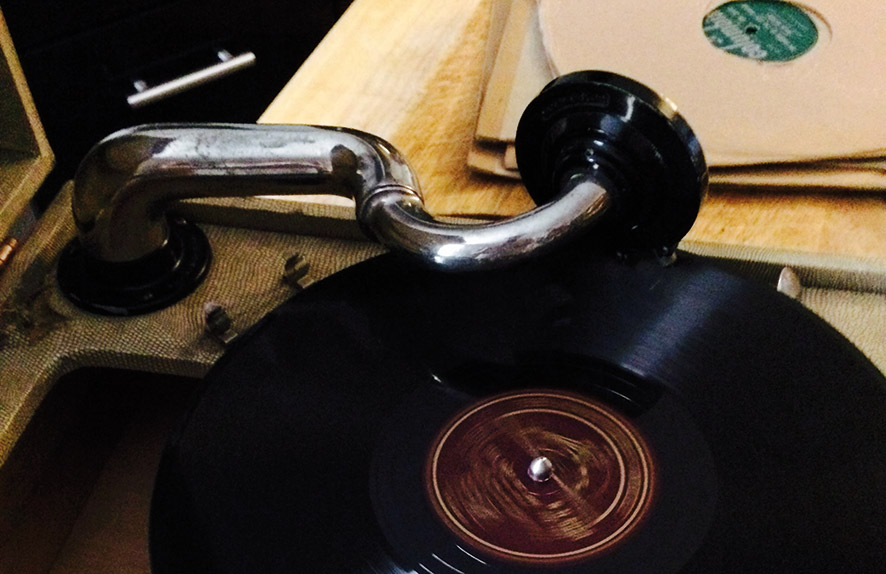 Much has been said and written recently about the vinyl renaissance. Apparently sales of newly pressed records are at an all-time high for recent years as people eschew the digital revolution for something a bit more tangible.

Being of the age when vinyl was still the format of choice and CDs were just something that Kieran Prendeville spread jam over on Tomorrow’s World, collecting vinyl again doesn’t really interest me. However, in recent months I’ve started to amass a pretty decent collection of shellac. Yes as dead formats go they don’t come much deader than the 78 rpm gramophone record, and here in lies the thrill for this collector.

As with many things in my life this latest obsession started with a bored whim purchase of a picnic gramophone from eBay. My husband looked pretty nonplussed when I told him of this latest moment of purchasing insanity and to be honest, he was probably right to be wary. Still it was too late to dissuade me as by the time I told him, the seller had already confirmed dispatch.
Now as with many eBay purchases looks and descriptions can be misleading. I was sold this gramophone as being in ‘working order’, it also came with a selection of the latest hits (circa 1948) for me to try. I eagerly got the hand crank out, wound up, placed the disc on the turntable and dropped the arm on the record expecting to be duly transported to another time and place as the voices of the past were unleashed once more. However gramophone lesson number 1 was about to be learnt.

Volume control on a gramophone comes in two settings, loud and ear drum piercing. As I frantically searched for the volume control on the gramophone (there isn’t one) my Jack Russell Robert Redford didn’t curiously cock his head like HMV’s mascot Nipper. Instead, he looked genuinely scared and cowered in his bed as this strange and incredibly loud caterwauling emitted from the small sound box. To be fair I had made the mistake of choosing a Gracie Fields tune who at the best of times had the voice not unlike a thousand fingers being scratched down a blackboard in unison.

Lesson number 2 came hard on the heels of lesson number 1 – buyer beware when purchasing from eBay. What soon became apparent was that although my gramophone played, we had issues. About a minute into playing, Gracie’s normally terrible voice started to take on the quality of Linda Blair’s voice in The Exorcist.  It was in fact so like the possessed ramblings of someone demoniacally possessed I’m sure at one point I heard Gracie mumble something about my Mother sucking lollipops in Hell. My new gramophone was in desperate need of a service as it wasn’t keeping speed consistently, though my husband was probably thinking it was in desperate need of a bonfire.

I puzzled for quite some time about where one might get a gramophone serviced, as time ticked on. I searched the internet and found a couple of specialists but this would involve posting it off and this looked like a prohibitively expensive option. I looked at my watch again and then a lightbulb flickered into life above my head. No, this wasn’t faulty wiring in my house, I’d actually had a genius idea. We have a very old fashioned watchmaker and jewellers in Hove, D.L Jones and Son, where I’d recently had my watch fixed. My thought process was that essentially a gramophone is a basic wind up mechanism not unlike a watch so they’d be able to fix it. 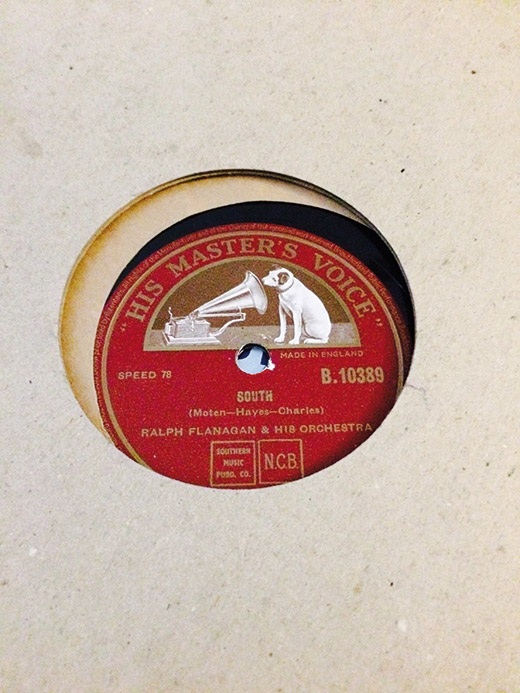 I suspected they wouldn’t have a website however I typed their name into Google and to my astonishment they do (check them out – www.dljonesandson.co.uk). I fired off an email not expecting a response but they came back to me the next day saying they’d be more than happy to look at it. Mr Jones Snr (probably in his late 80s) looked very happy to take a look and even reminisced about having a similar model in his youth. He popped the turntable off to discover the collected dust and grease of 60 years clogging the workings, however he told me I was in luck as it was mechanically sound and he could service it and to come back in a week.
After collecting, I eagerly got it home wound it up and it played like a dream. This is where my adventure really started – I needed tunes. 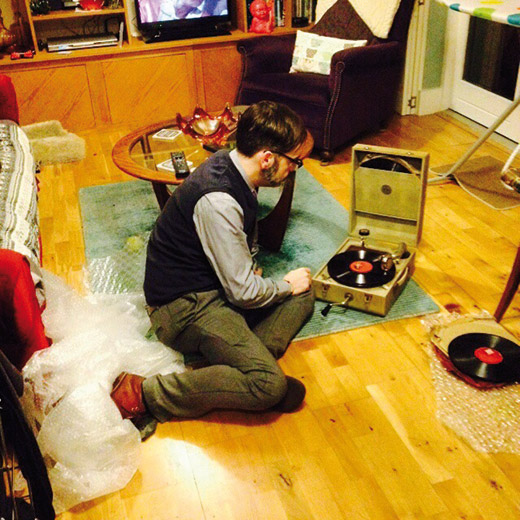 My top tips for collecting 78s are as follows – avoid classical music. Now don’t get me wrong, I love classical music but it really doesn’t work on 78. Speak to your local charity shop, as 78s are such a dead format often donations are just binned, so you can get some really good deals. Storage is key, 78s contain a song a side and are brittle so you need space if you’re going to collect seriously.  You should invest in new card sheaths to store your discs as the original paper ones are so flimsy you run the risk of breakages. You can get really good deals on Gumtree, I managed to pick up 300 catalogued jazz, swing and blues records for £35! I’ve since swelled my collection by another hundred or so.  Never pay more than a pound and take risks on what you buy. The first time I encountered Ted Heath and His Music I was expecting the rather dour Tory Prime Minister of the 70s playing a trombone like in the opening to The Flumps. I was however delighted to find that this Mr Heath is a rather excellent British Big Band leader of the 40s and 50s.

If you’re looking for a gramophone of your own I have had many friends recommend John Sleep (www.windupgram.co.uk) who is apparently one of the best stockists out there. His reconditioned gramophones aren’t cheap but the old adage ‘you get what your pay for’ is as always true so if you don’t spend the right money up front, you will pay it later. I wish you luck mining for black gold! 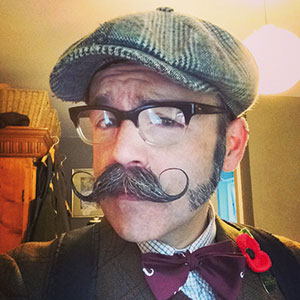 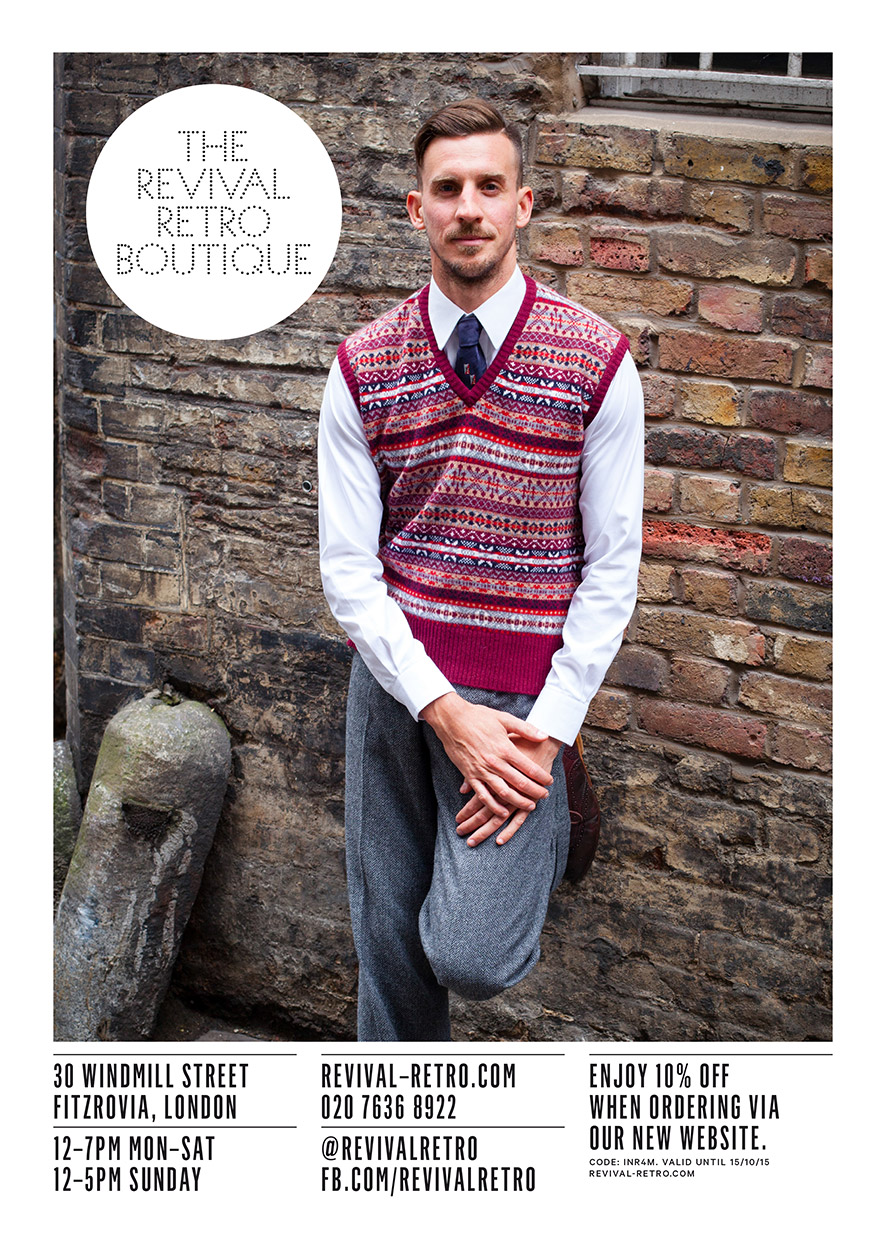