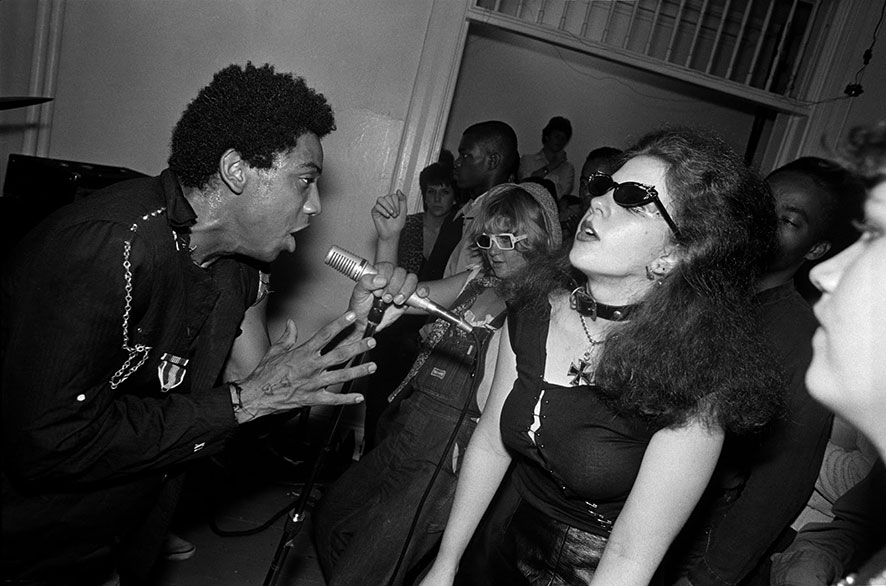 It seems to me that there is an intrinsic link between vintage clothing and music, but interestingly, whenever we talk about music and the vintage scene, we talk about the bands and the styles of music defined by the decades we love. For example the 1920s will always be the Jazz age, the 40s the Swing era, 50s Rock ‘n’ Roll and Disco in the 70s. However, as a sub-culture, nearly everyone I’ve ever met in the community comes from some form of alternative background. Whilst it’s great to learn about the music that matches our looks, we should never forget where we come from as it shaped the path we all took to get here.

You might not know to look at me but a large part of my musical background growing up was the Hardcore Punk scene.

Whilst most peoples view of Punk is the classic British style sported by the studded leather jacket, tartan trouser, multi-coloured Mohawk sporting punks shaped by Malcolm McLaren, Vivienne Westwood and The Sex Pistols, Hardcore is a whole different animal, and it helped define many more aspects of our lives than you might realise.

Formed as a reaction to the dissatisfaction of the Punk scene and its transformation into New Wave, Hardcore was a more visceral and energetic style of music formed around loud, distorted guitars and very clipped vocals often shouted or screamed. Whilst the punk of bands like The Sex Pistols and The Buzzcocks was essentially just a highly energised form of Rock ‘n’ Roll, Hardcore relied more on a rhythmic, driving sound, throwing away the traditional verse-chorus-verse structure for something more complex and discordant.

Starting on the American west coast Hardcore quickly spread across the country, crossing the Atlantic to the rest of the English-speaking world within a few years.

Hardcore’s widely recognised first salvo was the song “Out of Vogue” by the band Middle Class from Santa Ana, released in 1978, but it was the band Black Flag that can be seen to be the Godfathers of the genre. 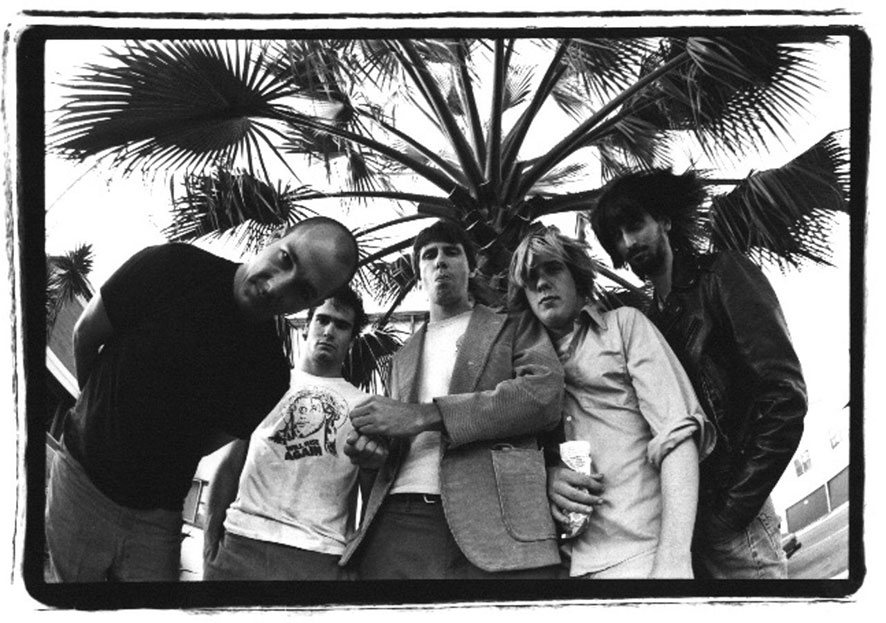 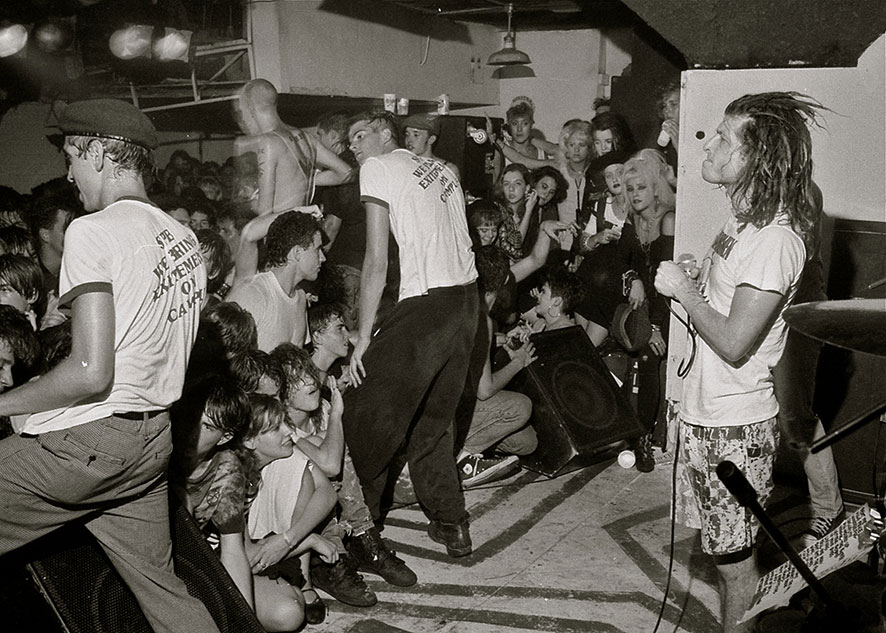 Formed in 1976 by Greg Ginn and Keith Morris in Hermosa Beach, California, Black Flag’s style was hard and fast, driven by Ginn’s low-pitched “Stun-gun” guitar lines and Morris’s manic vocal lines. Due to Black Flag’s constant and almost relentless thirst for gigs throughout 1978, they energised Southern California’s punk scene, but it was Morris’ departure from the band in 1979 that truly gave birth to the Hardcore Punk movement.

Just as Black Flag’s influence began to shape the sound of Los Angeles punk music, with contemporaries such as Fear and The Germs adopting the Hardcore sound, Keith Morris suddenly left the band and formed one of the scenes most influential bands: The Circle Jerks.

During this time, L.A. filmmaker Penelope Spheeris stumbled across the scene and persuaded many of the bands and audience members to be interviewed for a documentary. Coupled with live performances filmed throughout 1979 and 1980, the resulting film, The Decline of Western Civilization, is perhaps one of the greatest rock documentaries ever filmed, encapsulating an emerging sub-culture, largely ignored by the rock music press at the time. 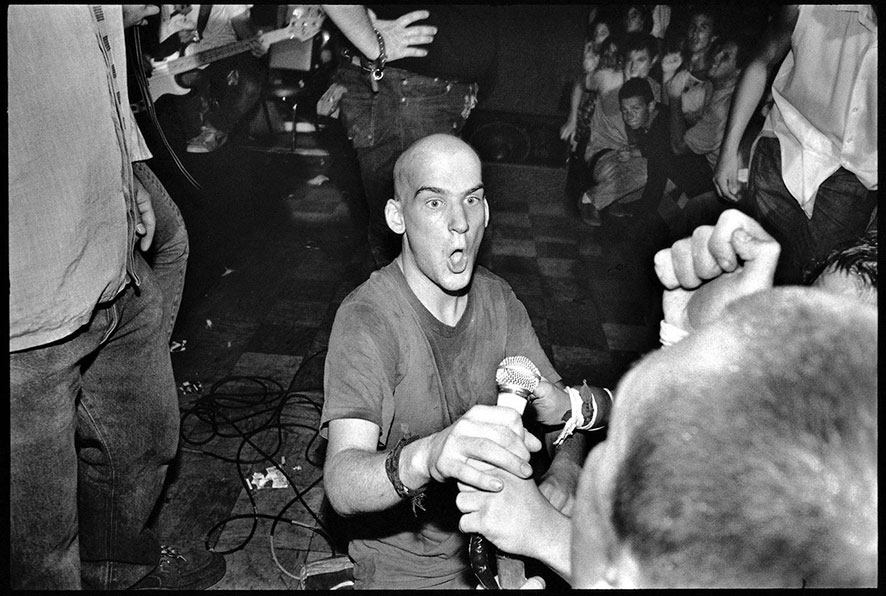 As the L.A. scene was gaining notoriety many punk bands in surrounding areas began to adopt a more Hardcore sound.

In the San Francisco bay area Dirk Dirksen’s club Mabuhay Gardens became a nexus point for the scene with bands such as Dead Kennedys, The Dicks and D.R.I. playing Hardcore gigs.

Meanwhile, over on the east coast, several bands were creating their own Hardcore scenes, supposedly uninfluenced by what was going on across the country from them. Whether this is, in fact, true still courts controversy to this day, and provides constant rivalry within the scene!

In Washington D.C. Bad Brains were at the forefront of the Hardcore Punk scene, in turn influencing Ian MacKaye to form first, The Teen Idols then, Minor Threat. The latter’s take on the influence of alcohol, drugs and promiscuity spurned the Straight Edge movement, and created yet more controversy within the scene.

When Bad Brains moved to New York City in 1981 they seeded what was to become one of the most lasting and influential scenes in punk history: New York Hardcore and its spiritual home CBGB’s. Bands such as Agnostic Front, Murphy’s Law, Cro-Mags, Reagan Youth and The Beastie Boys (yes THAT Beastie Boys) paved the way for many more bands to come over the 80s and beyond. 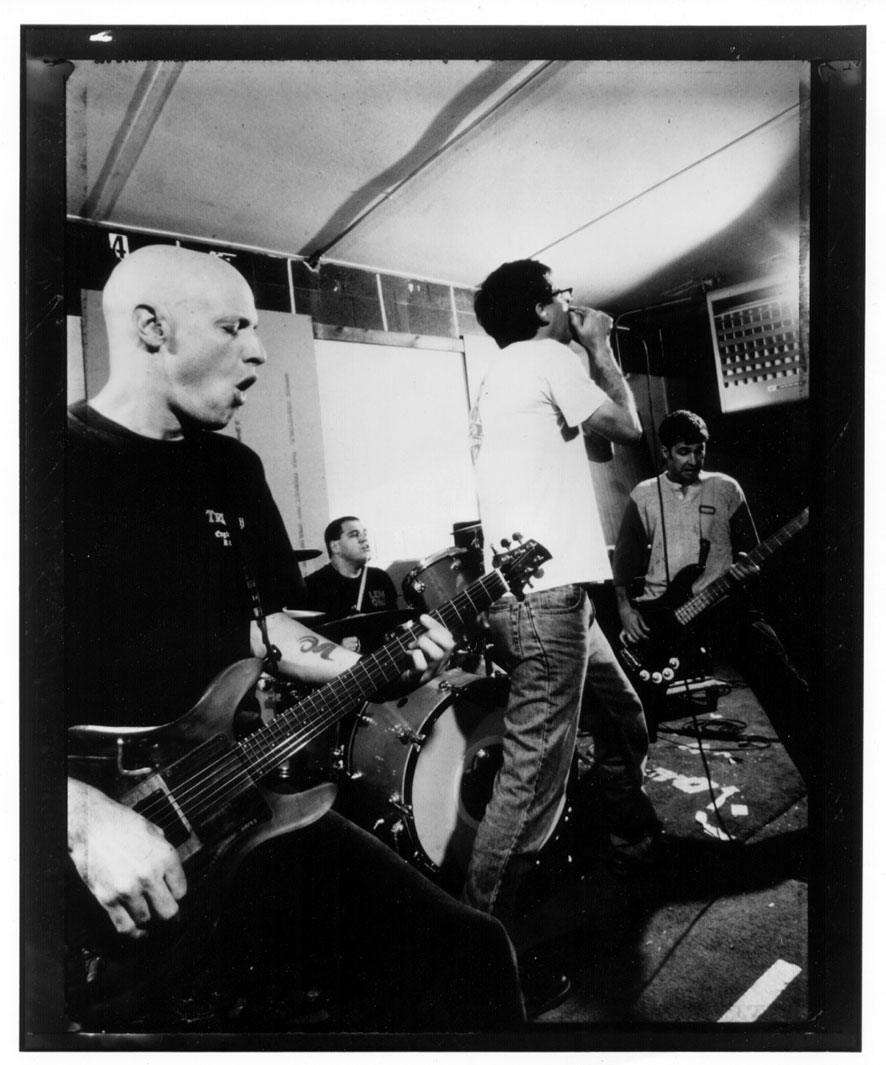 As the 80s progressed, Hardcore Punk went into decline, but it has still never gone away, in fact there are probably as many if not more hardcore bands on the scene today as there were at the beginning. Along the way it created many offshoots and sub-genres from which we are lucky enough to have some of the best rock bands out there.

Bands such as Hüsker Dü, The Meat Puppets, The Decendants, Butthole Surfers and The Melvins were a direct influence on the Seattle Grunge scene of the 1990s, themselves progressing and paving the way for the whole Alternative Rock genre. As Dave Grohl himself says: “No Hüsker Dü, no Foo Fighters”.

Many of the members of Hardcore bands went on to create music that defined other sub-genres such as Post-Hardcore and Emo, from which we have bands such as Jawbox, Fugazi, Quicksand and Helmet, Jimmy Eat World, Fall Out Boy & Dashboard Confessional.

And, of course, the success of the Hardcore scene allowed the more mainstream punk scene to burgeon and continue into the present day with bands like Green Day, Reel Big Fish, Bad Religion, The Offspring, Blink-182 and Rancid becoming household names and appearing regularly on music television.

The first and foremost of Hardcore Punk’s lasting legacies is that of DIY culture. The DIY ethos is intrinsically tied to Hardcore punk’s origins of anti-consumerism and anti-establishment. Many of the early bands would organise and put on their own gigs, often putting shows on in people’s basements in residential homes when the traditional venues wouldn’t let them play. They would create their own marketing and merchandise and sell this themselves after the shows.

In fact here’s a little direct quote from the punk ethic, which is especially relevant to the vintage scene: “Sewing, repairing, or modifying clothing rather than buying new clothes.”

Another large part of this DIY ethic also led directly to our lasting culture of independent record labels: Greg Ginn of Black Flag started SST Records to put out Black Flag recordings, Jello Biafra did the same for Dead Kennedys with Alternative Tentacles, Ian MacKaye created Dischord records to support and promote other bands within the DC area and has put out releases from most of greatest alternative rock bands over the years.

The Decline of the Western Civilisation – directed by Penelope Spheeris 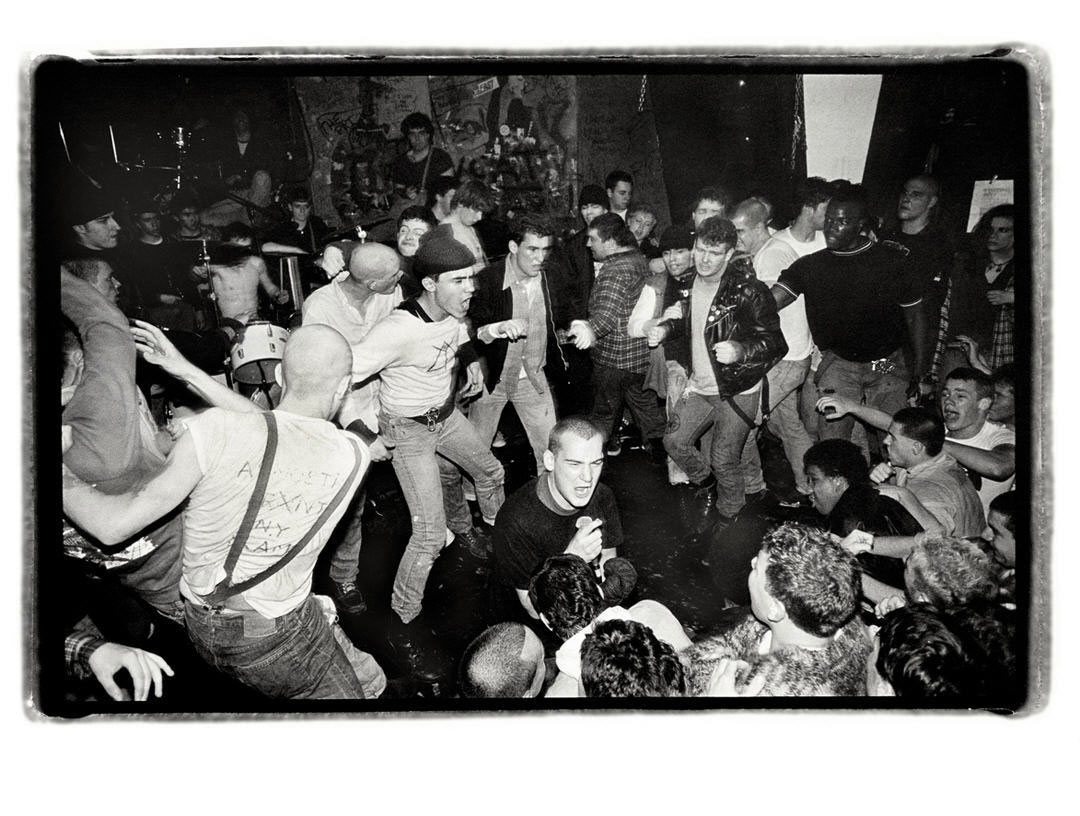 Hardcore Punk, believe it or not, had a far more influential and lasting influence on our clothing and fashion that the more obvious British punk style did. Part of the DIY ethic meant that a lot of the Hardcore kids dressed, for the time, in a very stripped down and simple manner; they couldn’t afford to spend loads on clothes and weren’t interested in customisation, flamboyance or embellishment, so they adopted a more functional style which we know well today, that of a t-shirt, jeans and combat-boots or trainers with shaved crew-cut hair.

The graphical style many of the bands adopted on their merchandise or cover art also has a lasting influence on a lot of the visual media we see today, including the things we see printed on clothing available on the high street. Black Flag’s simple four-line logo (created by Raymond Pettibon) has been seen as much as The Ramones shield or the Rolling Stones tongue, that ‘vintage’ weathered look you see on clothing? That comes from photocopying artwork, hand-printing your own T-shirts and using homemade materials to paint onto clothes.

Even the simple “X” that Hardcore bands uses to scrawl on the backs of peoples hands so they knew who’d paid to get into their gig has turned up in more places that I could mention (for an example just Google “your logo is not hardcore”).

The Hardcore scene was also responsible for the increase and influence of the ‘Zine’ or fanzine, which in turn had an influence on the use of the world wide web and directly enabled those blogs and tumblrs you all write or read… even this magazine itself!

Our Band Could Be Your Life: Scenes from the American Indie Underground, 1981-1991 by Michael Azerrad

CBGB and OMFUG: Thirty Years from the Home of Underground Rock by Hilly Kristal

Mathew Keller is a designer, photographer and film-maker living in Brighton. For the last three and a half years he’s been capturing intimate portraits of fellow full-time lovers-of-the-past for his Southern Retro project: www.southernretro.com 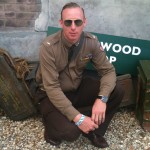