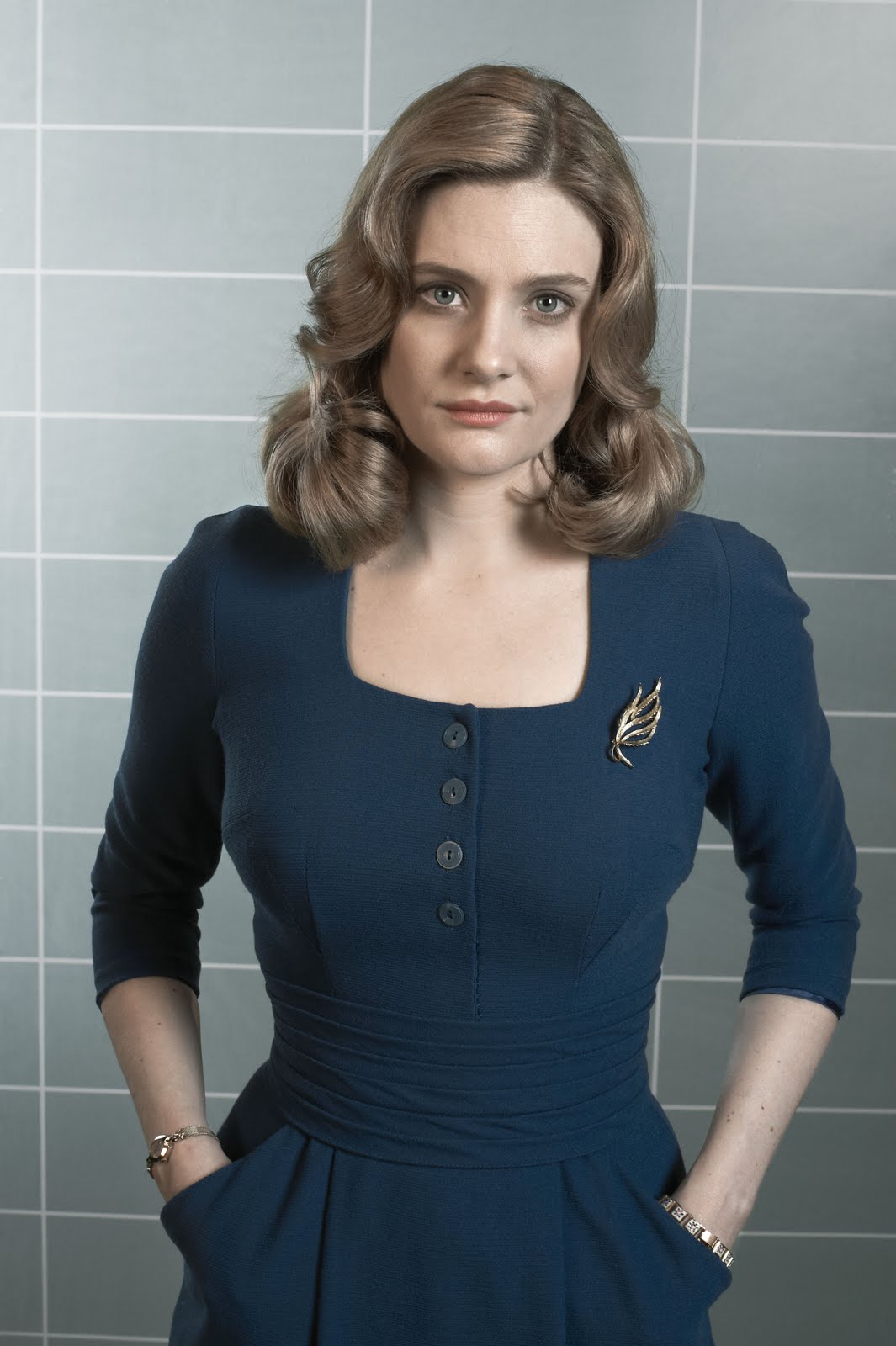 Can you be a feminist and love ‘vintage’ at the same time? Where to start? Perhaps a definition from the trusty OED? I consulted this, not to treat you to a university style paper, but because so many of my friends admit to not being entirely sure what feminism is anymore, never mind considering admitting to being a feminist. Sadly, it seems to have become a sort of dirty word (more on that later). Over to the Oxford English Dictionary:

feminism, n. Advocacy of equality of the sexes and the establishment of the political, social, and economic rights of the female sex; the movement associated with this.

The OED also gives this handy little history of feminism: ‘The issue of rights for women first became prominent during the French and American revolutions in the late 18th century, with regard especially to property rights, the marriage relationship, and the right to vote. In Britain it was not until the emergence of the suffragette movement in the late 19th century that there was significant political change. A ‘second wave’ of feminism arose in the 1960s, concerned especially with economic and social discrimination, with an emphasis on unity and sisterhood. A more diverse ‘third wave’ is sometimes considered to have arisen in the 1980s and 1990s, as a reaction against the perceived lack of focus on class and race issues in earlier movements.’

Most famously, we’ve all heard of the Suffragettes of the late 19th and early 20th century, and the ‘Burn your bras’ mentality of the 60s, followed by Germaine Greer’s, The Female Eunuch published in 1970. Perhaps one of the most famous feminists of more recent years is Caitlin Moran with her book, How to be a Woman. I now know of men who class themselves as feminists after reading this jolly jape (at times).

As I mentioned before, when the F word (yep feminism) is mentioned now it often has negative connotations, associated with misandry, the hatred of men. I have friends who share exactly the same beliefs as me… that women and men should be treated equally, that we should have equal choices… but who would never class themselves as ‘feminists’ for fear of being assumed a ‘man-hater’, or just the apprehension that feminism has to be so much complicated than it really is. They don’t want to be seen to identify with the word for fear of associating themselves with such a controversial label. I am happy to call myself a feminist as I believe that women are, and should be treated as, equal to any man. On a basic level, to me, that’s it!

Though I often hear, ‘But we don’t need feminism anymore!’ I get terribly frustrated when I’m told that we should just be grateful for the vote, to be able to work (still often at lower pay that the equivalent for a man), to have our own money AND have a family. For me, we still have a long way to go: Consider the backlash and horrific treatment that Caroline Criado Perez received when she dared to campaign for a woman to be featured on a bank note, after it was announced that Sir Winston Churchill will replace social reformer Elizabeth Fry on the five pound note. People still argue that we don’t need feminism, that we are obsessing about trivialities. Perez said in an interview in the Telegraph, ‘It’s very easy to say that small decisions like this don’t matter but actually the culture we live in is made up of little tiny sexist acts which you can just ignore but when you think of them collectively you start to see a pattern.” The article goes on to say, ‘Her petition argues that this matters because of a broader sexism in society, where only one in five experts in the media is a woman, and where female directors represent less than 17 per cent of the total.’

Feminism to me is about choice. Women fought for our right to have a choice – if that choice is to be a home maker then we should fully support it, but likewise, if a woman wants to exercise her choice to have a career and perhaps not change her maiden name when getting married, or even do all of them at once, we should not criticise her choice. 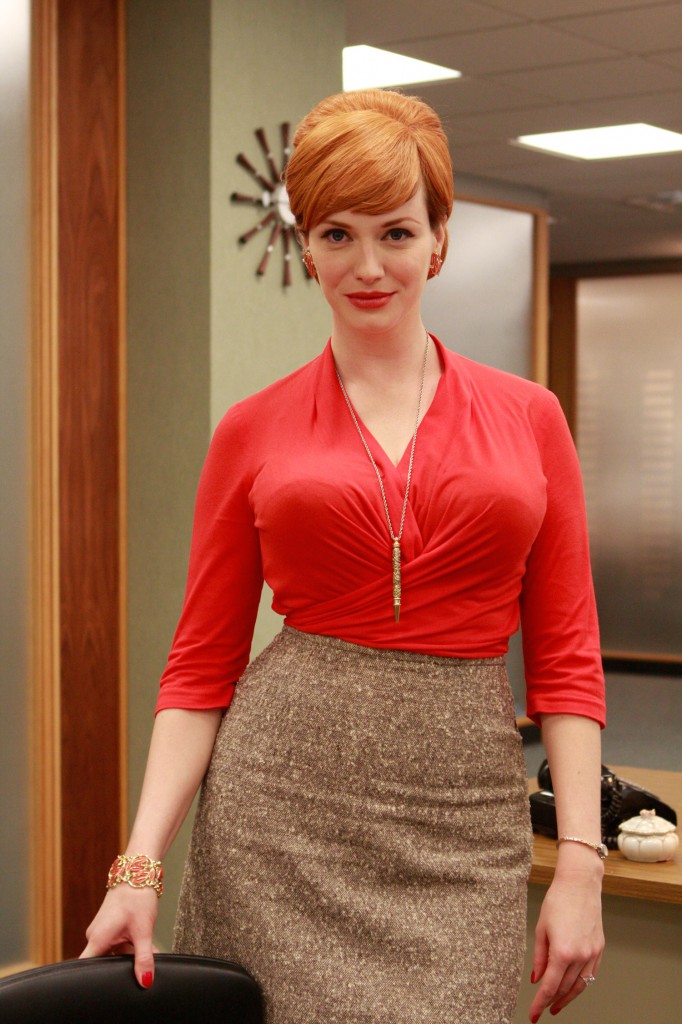 So…when I sat down to ponder this question, I decided to ask the world of Twitter their thoughts… Yes, you could say I was procrastinating, and granted, the respondents would likely be fans of ‘The Vintage’ but they wouldn’t necessarily identify themselves as feminists per se (in my defense, I did ask them to retweet too for a wider opinion); however, social media seemed a sensible way to do a quick straw poll and garner some opinions in a speedy fashion.

I anxiously expected there to be rather a backlash of various retorts, claiming that I couldn’t possibly call myself a Feminist (yes, I sometimes use a capital F on purpose) AND dress in a mid-century style. This must mean that I also want to declare my love for a time when sexism and oppression was still very much alive.

I tweeted, ‘Feminism & Vintage… Are the two mutually exclusive?’ and the responses were all in agreement with each other (yes, not a very scientific poll!) 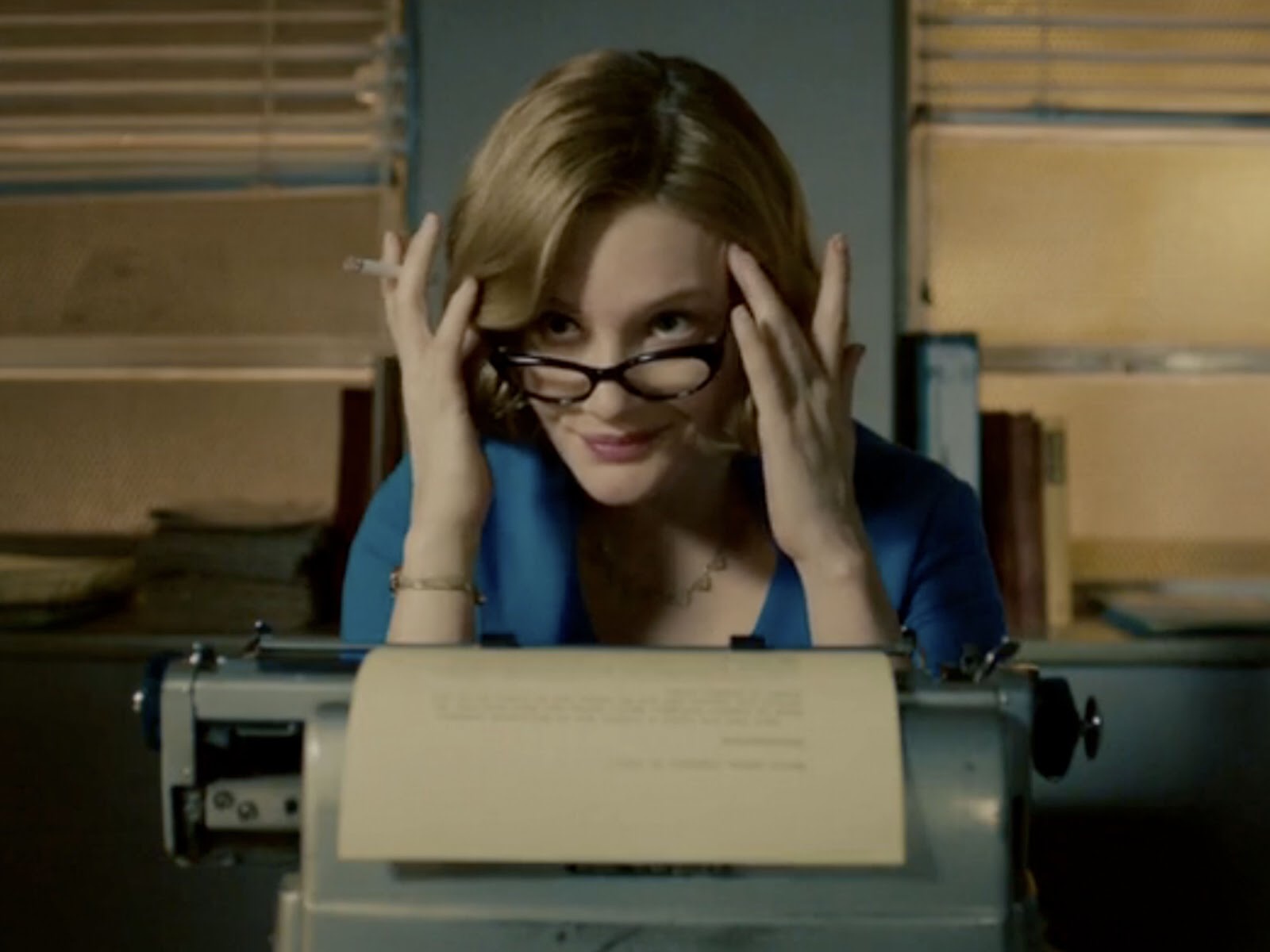 @chaznmax tweeted:
‘What an amazing thing to write about! I am vintage & self identify as a feminist. I have been told that I cannot be a feminist because I dress 40s but I say that the women of the 40s paved the way for women’s lib. After all, it would have been their daughters they raised to not accept any bullshit. They tasted freedom and independence during the war years and had it all but taken away again when the men came home. That’s what I think anyway.’

@incendiarychat tweeted:
‘um, feminism isn’t linked to your taste in clothing and home décor the last time I looked.’

@Vicgartland tweeted:
‘I don’t believe they are. Liking the style of an era doesn’t mean you wish to live an oppressed lifestyle.’

@crinolinerobot tweeted:
‘Nope. For one thing, a love of vintage doesn’t mean living a detail perfect period lifestyle. And I think women into vintage are more aware than most of the actions of women in the past. It’s hard not to value your vote when you realise what the suffragettes had to do to get it…ditto how hard women such as the ones from Ford Dagenham had to struggle for equal pay.’

Ok, so you’ve gathered I’m a feminist, but how can I love vintage style at the same time? On a very basic level, I just love the style & fit of the clothes, and as the ladies from Twitter so eloquently put it, this doesn’t automatically mean that I have a desire to revisit the lifestyle that women endured too!

If feminism is about choice then we should be able to wear whatever we want to wear, regardless of what era the style of dress is associated with. It is the overall look that many of us admire, and not the drudging domesticity. If someone chooses to dress in the style of a ‘50s house wife’, it doesn’t mean she wants to give up her job, iphone, laptop and washing machine! The ladies who wore these outfits at the time weren’t necessarily all happy with their lot, as glamorous as it might look on television. 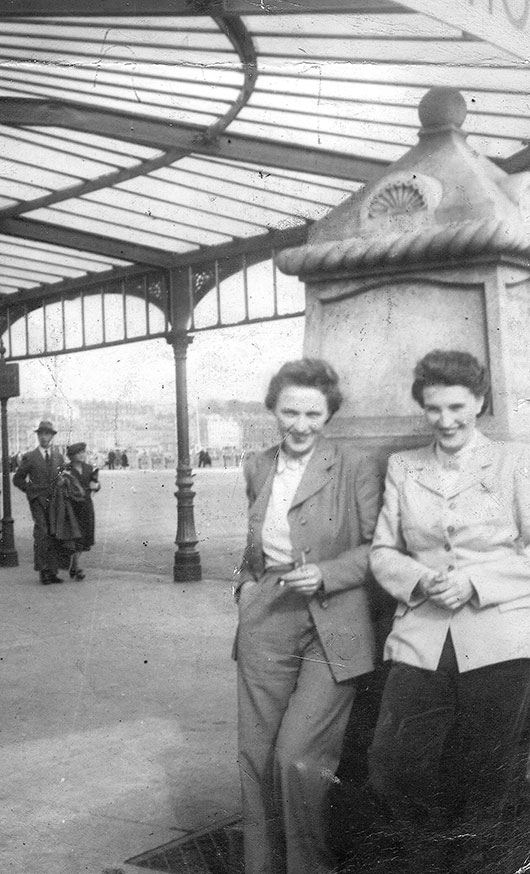 Perhaps tellingly though, my ‘style icons’ are the feisty career ladies of the late 50s and 60s. These wonderful women include my late grandmother, a much-travelled licensee who was ahead of her time and always impeccably dressed (wearing trouser suits long before it was the socially accepted norm!) From the world of television, I take inspiration from Bel, the woman producer in the BBC programme, The Hour; the determined and charming Joan Harris (nee Holloway) from Mad Men who rather questionably slept with a client in order to become a partner of the advertising firm; the women of The Bletchley Circle, and not forgetting Ginny from Masters of Sex. I admire their fashion, the sleek no nonsense pencil shapes (I look dreadful in a circle skirt!) and take much of my inspiration from those strong, forward-thinking women.

I spoke to Rachel Cooke, Guardian writer and author of Her Brilliant Career: Ten Extraordinary Women of the Fifties. She shared some of her thoughts on the subject with me:

‘I think we should probably all know by now that behaviour and dress/style are two different things. But on the other hand, we tell the world a lot about ourselves with our clothes and our furniture. That’s why we take so much trouble over these things: to express ourselves. There’s always a message. 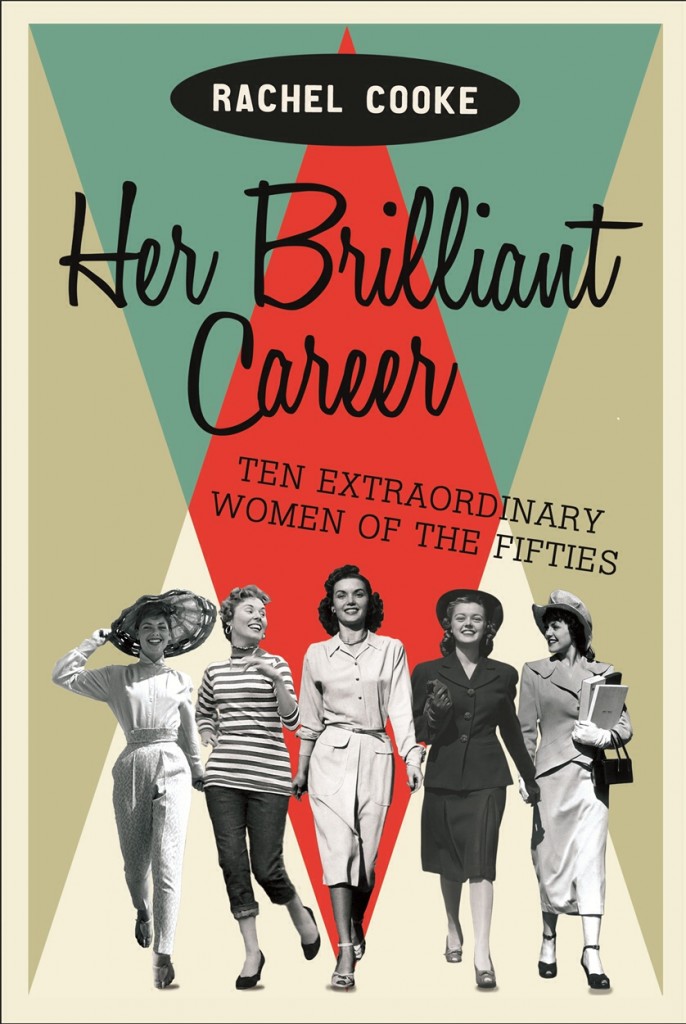 What I feel about it is this. My book has taught me not to patronise the past. I hate the way “the Fifties” is used as a pejorative now – as in “this is just like the Fifties!” with a harrumph. What working on HBC has taught me is that nothing is straightforward when it comes to the past, and for every ten housewives, there was one woman struggling to make her way in the world, outside the home – even then. So I’ve no reason to feel badly at all about my own penchant for mid century furniture and swing coats; the women in my book had Ercol sideboards and Dior-style skirts AND amazing careers (and sex lives).

In any case, I simply like the way these things LOOK, I admire how well they were made. In some ways, vintage – when it comes to clothes – is positively feminist because you’re not buying into the current ideas of how a woman should look. You’re not slavishly following fashion and struggling to fit into clothes that are a size zero (plus you are recycling, which is nicely ethical).’   More to follow on Rachel’s book in the next issue.

Maybe I’m biased, but the vintage girls I know are some of the most strong-willed women I know. You could say they wear very feminine clothes, but at the same time don’t have the most stereotypically ‘female’ pastimes. I have found that broadly speaking, an independent style of dressing attracts strong women like my good friend Alex. She is happiest in a circle skirt and victory rolls, whilst under the bonnet of her beloved Morris Minor or helping her boyfriend renovate his vintage Land Rover Carawagon, and is the most independent, strong young woman that I know. She needs to be strong, the amount of pictures she has taken when they don’t think she’s looking! 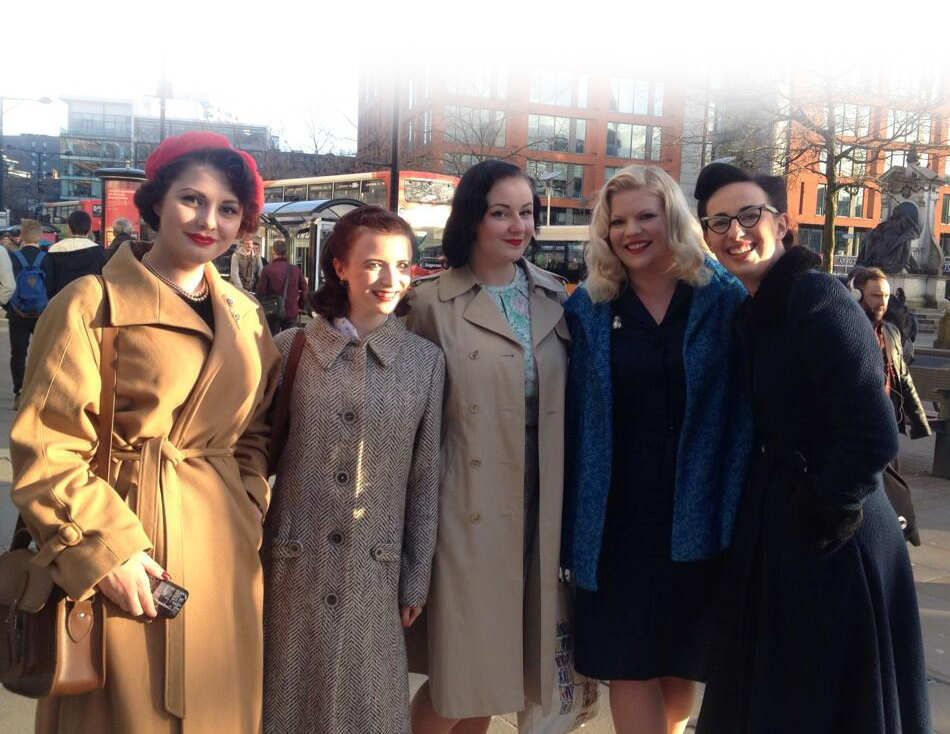 I don’t feel I’m over romanticising any period of history by wearing the clothes of that era – I wear them because I love the style and they suit my body shape, not to mention the fact that they are made so damn well. If the two were inextricably linked then I’d be donning a suffragette outfit every day! I just don’t think that the two are mutually exclusive. When researching this article, I prepared myself for an influx of rather sexist responses on Twitter suggesting that because I dress in a vintage style, I must also think that I would like to return to that era and all the difficulties that went with it. I was happily surprised at the responses I received, though I’m not naïve enough to think that this is the only viewpoint shared, but it definitely reinforces my belief that as a vintage loving girl, it’s perfectly fine to wear the styles of a bygone era, AND to call oneself a feminist at the same time.

Rebecca Mountfield is a Mid-Century, Literature, News, & Radio 4 loving lady, with a background in English Literature. Currently, by day, a trainer for a credit card company, and by night, is studying for another Masters, this time in English Language. 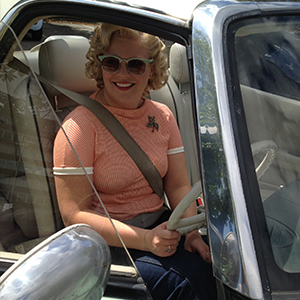 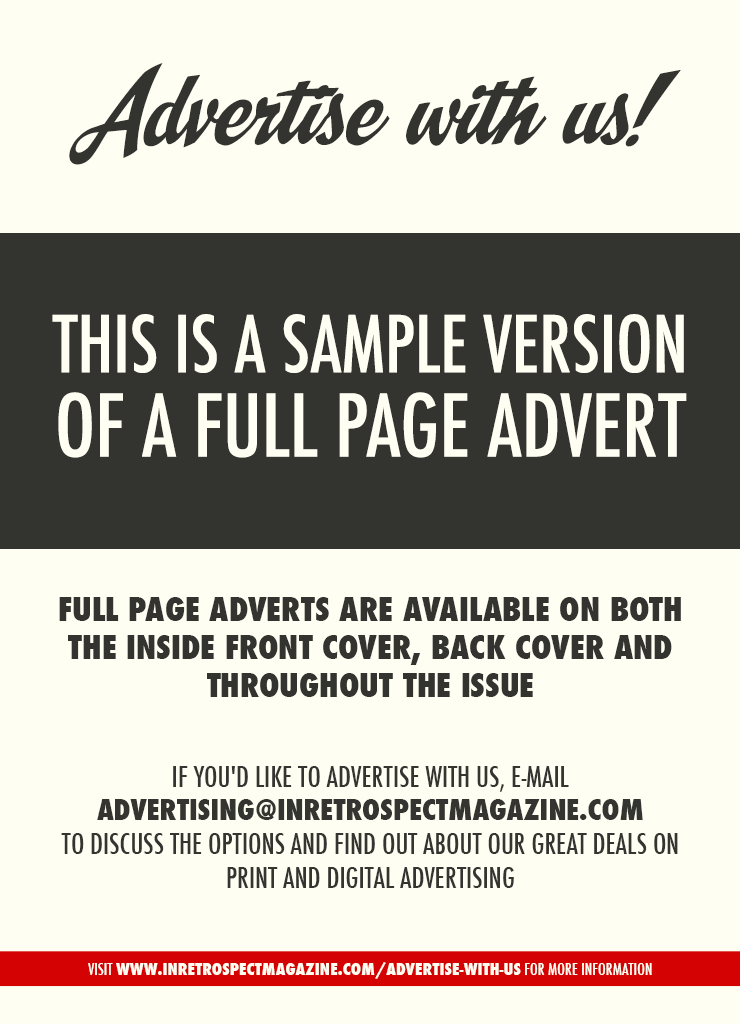