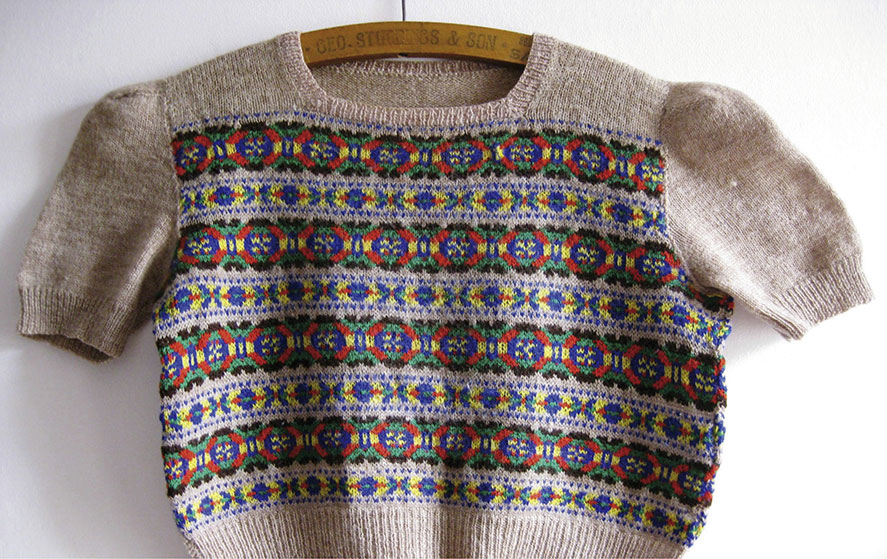 Knitwear has an important place in many a retrospective wardrobe. Whether it’s a treasured 1940s pullover or a jumper newly knitted from a period pattern, woollies not only add an attractive finishing touch to an outfit, but are immensely practical too. Fair Isle in particular is one of the most enduring and characteristic of knitting traditions. Its unisex appeal has spanned decades and is still attractive today as when it came to the fashionable fore in the 1920s.

Historically associated with the eponymous island situated amongst the Shetland Isles in the northern reaches of Scotland, the origins of Fair Isle are unknown yet its unique style is easily identifiable through the use of traditional patterns and motifs. 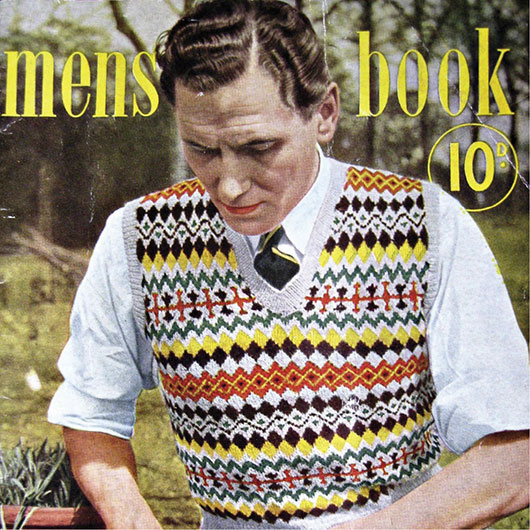 Usually knitted in two alternating colours per row with an entire garment being knitted from four or more colours, Fair Isle’s repetitive and stylised motifs have been developed by knitters over the centuries; resulting in characteristic stitch patterns such as stars, ‘OXO’ nought and crosses, ‘peerie flooers’ (‘little flowers’ spoken in the Shetland dialect), diamonds and geometric patterns. Fair Isle is deeply ingrained in the Scottish heritage, yet it took a surprising public figure to suddenly catapult it to the forefront of British fashion.

In the early 1920s, the Prince of Wales (later Edward VIII) was a much-loved member of the royal family. Dashing with an easy-going charm that appealed to both men and women alike, the Prince was a fashionable figurehead for the House of Windsor, with a penchant for being impeccably dressed. When a Shetland-based draper gifted a Fair Isle pullover to the royal household it found its way into the Prince of Wales’ hands. Possibly thinking that the pullover would make an ideal cover-up on the golf course, he inadvertently started a new craze for this casual knitwear when he began to wear it. Soon the Prince was being regularly photographed in his Fair Isles; correspondingly in 1925, the artist John St. Helier Lander painted a portrait of the Prince wearing a Fair Isle jumper whilst nonchalantly holding his Cairn terrier. This informal attire was a far cry from the usual reserved royal portraiture wardrobe of ceremonial garb. By this time Fair Isle was also being called ‘jazz pattern’ as the young people who wore these knits often followed the craze for the lively jazz music that was being blared out from gramophones the length and breadth of Britain; including those in the royal household. Thanks to the Prince’s patronage, brightly coloured Fair Isle knitwear in the form of loose-fitting, long-line cardigans, pullovers and sweaters rapidly became de rigueur apparel for both men and women. For the latter, the dominant style of the ‘20s was the androgynous straight up-and-down silhouette with no defined waistline, which did away with restrictive corsets and conveyed the social freedom that the new decade offered for women. The body-skimming looseness of Fair Isle knitwear was ideal for women seeking this boyish look and for those who didn’t dare team their jumpers with masculine trousers, Fair Isles were a perfect match for a ‘safe’ tweed skirt. Typical of fashion crazes, Fair Isle for women began to tail off in the 1930s when other knitwear trends took over, though it was still popular for men and children. However, Fair Isle was soon to regain its place as Second World War austerity began to hit the home front.

The onset of the Second World War in 1939 ushered in economy drives for virtually all aspects of daily life; including the ‘Make Do and Mend’ ethic and the very unwelcome introduction of clothes rationing in 1941. As knitting yarn was similarly rationed due to wool being required for military uniforms, knitters resorted to unravelling discarded knitwear and reusing the yarn to knit new garments from. However, one the problems associated with using pre-knitted yarn was that there might not be enough of it in a single colour to knit a complete garment from; this is where Fair Isle came to the rescue.

Thrifty knitters soon realised that Fair Isle was the perfect solution to the wool shortages as the multi-coloured designs could economically use up recycled woollen oddments. Women’s magazines and yarn manufacturers were quick to pick up on this and were soon printing patterns covering an extensive range of head-to-toe garments and accessories in Fair Isle for all the family; including berets and caps, gloves, socks, slippers – even handbags! Fair Isle also perfectly lended itself to that female sartorial classic: the twin-set. Either worked in all-over Fair Isle or a few bands added to a yoke to add a touch of colour to an otherwise plain jumper or cardigan, Fair Isle twin-sets were a versatile yet elegant addition to a wartime wardrobe.

The Fifties and Beyond

Although the epitome of unisex austerity fashion in both the wartime and post-war years, by the mid-1950s Fair Isle had been overtaken in the fashion stakes by new trends in conjunction with the introduction of man-made yarns such as acrylic, which enticed many knitters away from this traditional knit; with the exception of children’s clothes and that masculine perennial favourite: the Fair Isle pullover. Yet, the resurgence of handcrafts in the 1970s and early ‘80s along with the nostalgia for the 1930s and ‘40s, saw Fair Isle knits appear on the backs of influential style-setters such as the fashion designer Ossie Clark and The Beatles’ Paul McCartney. Yarn manufacturer Sirdar even published a series of knitting patterns, Nostalgia – The ‘40s Look, featuring cover photos of models wearing Fair Isle jumpers set against the backdrop of the period front room, complete with moustachioed ‘husband’. By the mid-1980s Fair Isle had been revitalised by designers as diverse as the post-punk BodyMap duo of Stevie Stewart and David Holah, and Ralph Lauren who favoured Fair Isle due to its ‘wholesome’ preppy look evocative of inter-war Oxbridge students. 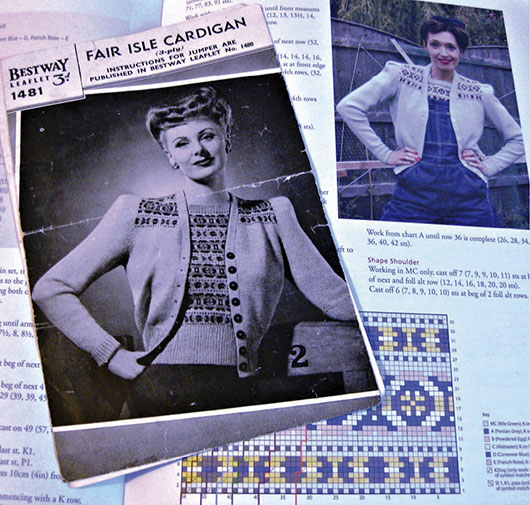 Today, Fair Isle knitwear – both contemporary and vintage – is still popular with knitters, retrospective folk and also costume designers for wartime dramas; for example, the BBC’s Land Girls and ITV’s Home Fires. Original 1940s knitwear can still turn up and its often care-worn appearance is perfect for the re-enactor looking to create authenticity. For those aren’t so lucky in the finds department, can’t knit or don’t know a nimble-fingered knitter who can generously knit up a Fair Isle jumper, traditional woollen knitwear can be brought online from many Shetland and Fair Isle-based knitters. Otherwise, you could pick up a pair of needles and a ball of wool and learn to knit one, purl one…

Liza Hollinghurst is a freelance writer who enjoys putting pen to paper on subjects such as twentieth century social history, vintage lifestyle and needlecraft. She not only wears vintage but drives it too, being the proud owner of a Morris Minor named Archie www.thevintageknitter.blogspot.co.uk 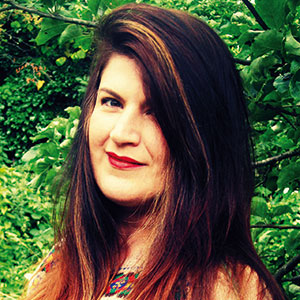 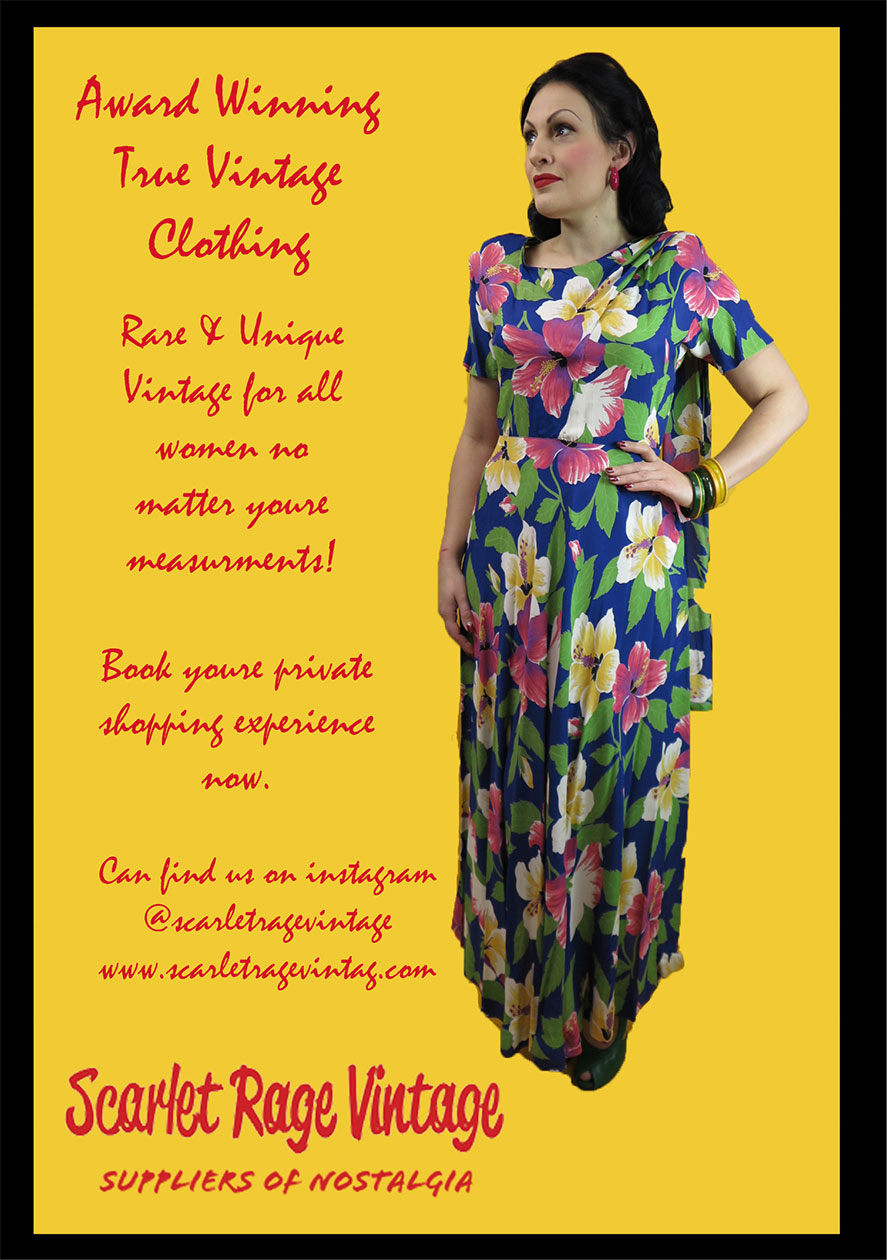