My husband and I have never had much luck with cars. Well when I say we’ve not had much luck, the first car we owned was ace. It was relatively new, cheap to run and insure and sailed through every MOT with no work needed.  “Why did you get rid of this incredible car?” I hear you ask. Well it was a canary yellow Fiat Panda bought for necessity rather than its aesthetic and being vain sorts we decided to ‘trade up’ and purchase a second hand BMW Mini. Unfortunately, this is where our problems began.

Not really knowing much about cars the main selling point for the Mini was the fact the vendor was cute. This later transpired not to be a sensible reason to purchase a car as it was a complete money eating pig. A few short months after purchase and already having spent about a small fortune on it, the clutch decided to fall out. Rather than keep throwing money at it we decided to cut our losses and run.

What followed was a procession of awful cars. First a gold Daewoo Matiz, which in the words of the film Grease was, a ‘real pussy wagon’ however said pussy very much belonged to Mrs Slocombe. When that car/shopping trolley inevitably died we purchased a Renault Clio. We didn’t have much luck with that either as the cambelt snapped and sheered the pistons making it undriveable after about three months. Gluttons for punishment, we then made the mistake of purchasing another Clio. This was fine during the summer but as the autumn months approached we noticed that it was raining. Perhaps this isn’t very unusual for autumn, however the rain was pouring inside the car. 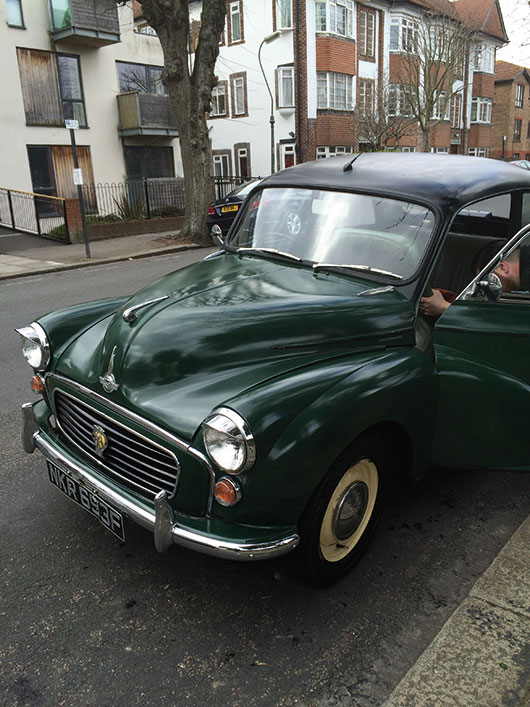 So my husband and I got chatting about our run of bad luck with cars and the money we’d wasted and we both thought why not buy a classic. Our rationale for this was simple – we’re spending a fortune on ugly modern cars that never retain their value so why not invest in a car that might hold some value or appreciate. We’d both always loved Morris Minors so this seemed like a good choice.

So before purchasing we did some research about what pitfalls to look for and took advice from friends more knowledgeable than ourselves. My friend Tim used to restore classics for a living, so he was the first port of call for advice.  When I mentioned we were considering buying a Morris Minor his first piece of advice was “don’t”, however by this point we were already determined and our minds made up.

One of the main things to look for when buying a classic is rust and I’m not just talking surface bubbles. Morris Minors are famous for suffering from tin worm and you really do need to check out not only the bodywork but get under the car and check the chassis. Welding on these things isn’t cheap so try and buy solid straight off the bat. A good tip is to take a magnet with you when viewing the moggy of your dreams and run it over the bodywork – this will let you know if it is more filler than metal. Lift the carpets and look at the floor panels as these are very prone to rust and the last thing you want is to be peddling your car Flintstone’s style. Another general rule of thumb we were advised is that you get what you pay for, so pay as much as you can afford.

So armed with all this good advice we chose to completely ignore it and buy a car sight unseen from eBay. Well when I say that we bought from eBay, we were watching this rather nice racing green beauty but forgot to set the alarm and missed slipping in our highest bid. Both feeling rather deflated I decided to send a message to the vendor saying that if for any reason the sale didn’t go through, that we’d be interested in a private sale. The very next day she contacted me to say that the purchaser on eBay had indeed turned out to be a time waster. Our luck had turned and the car was ours.

Now buying a car sight unseen is a nerve racking experience however the owner assured me the car was in good shape and said she’d put it through an MOT before we completed the purchase. She was as good as her word and the car went through the MOT without a fault. I organised for the car to be transported and it arrived five days after purchase. This was a nervous moment however, other than a few surface rust bubbles and a bit of a home paint job on the roof, the car seems to be in great order.

We’ve gone against normal car female naming conventions and christened our moggy Aubrey after artist and illustrator Aubrey Beardsley, who was from our hometown of Brighton. He’s a real treat to drive and gets lots of admiring looks, though these looks could just be surprise at the tremendous roar of the engine. It’s an odd thing with modern cars, they’re so quiet, however being in this vintage beauty there’s no mistaking you’ve an engine propelling at a heady top speed of 60 mph. The relatively slow speed isn’t an issue for us our local council has cut the speed limit in most of the town to 20mph. So eventually we will get him re-sprayed and the seats reupholstered but for now I am in love and he’s perfect. I love cars and driving once more. 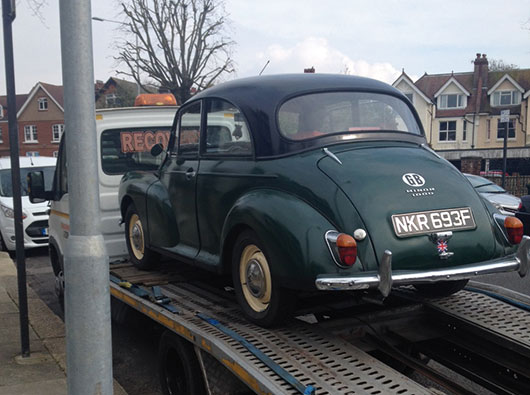